As you age and your skin incurs the abuse of daily living (such as sun, stress, pollution), the cell turnover rate typically slows down. This means that the new cells take longer to form and reach the top. The old cells accumulate and stay on the surface longer. As the stratum corneum thickens and the area of new cells shrink, skin becomes less healthy. You begin to notice those unwelcome signs of aging including: fine lines and wrinkles, freckles and age spots, uneven skin tone, loss of elasticity and loss of natural skin hydration. The Obagi Nu-Derm Skin Care System, a physician-prescribed skin care system, accelerates the cellular turnover. This System penetrates below the skin's surface to correct damage in all layers of the skin (the stratum corneum, the epidermis and the dermis). It corrects functions of the skin at the cellular level, to Transform skin's cellular function to help it look and act younger and healthier. The System triggers a Therapeutic Cascade™ that:


Obagi Nu Derm Skin Care is a Skin Health Restoration system for helping restore skin to a healthy sate, free of disease and deterioration. Obagi Nu Derm Skin Health Restoration is achieved through the use of topical agents that work synergistically to help regulate skin cell functions and improve circulation. This enables the skin to constantly renew itself, repair damage, and act as a effective barrier.

Obagi Nu Derm is also intended to bring the skin to an active and tolerant state so that it responds better to a rejuvenation or surgical procedure, heals faster, and is less likely to exhibit an undesirable post-procedure response.

Obagi Nu Derm offers a flexible, easy-to-use regimen that can work for all skin types and a wide range of clinical conditions. Each ingredient in the system was selected for its individual as well as its synergistic activity. As a result, the key cell types are regulated and angiogenesis is stimulated. The issues of product penetration, potency, skin type, and tolerability levels, which must work in harmony for efficacy, are coordinated in the Obagi Nu Derm system/

The Obagi Nu Derm Skin Care regimen has four basic steps: Prepare, Correct, Stimulate, and Protect. Control, and optional step to reduce or stop anticipated reactions, is to be used as needed.


The Obagi Nu Derm Skin Care Prepare Step cleans and tones the skin, removing impurities, dead skin cells, and bacteria; and prepares it for the steps that follow. This step is accomplished without skin irritation. At the completion of this step, the skin is returned to its normal pH level.


The Obagi Nu Derm Skin Care Correct Step works on the epidermis. It makes the stratum corneum soft and compact and increases the rate of mitosis to improve the turnover of healthy, new keratinocytes. Melanocytes are also regulated to produce melanin more evenly and efficiently. Bleaching is part of the Obagi Num Derm Skin Care Correct Step and is accomplished through the use of hydroquinone.


The Obagi Nu Derm Skin Care Control Step offers the patient the ability to control the anticipated reactions seen initially with treatment. It involves the use of preparations to diminish discomfort from excessive dryness, itching, redness, or burning that may occur as tolerance is being built-up. Patients may especially desire to control such reactions when they have an important upcoming professional or social event.

Upon completion of one skin cycle, the skin usually begins to tolerate the treatment and the need for the Control Step diminishes. This state is usually accompanied by increased patient motivation and compliance. 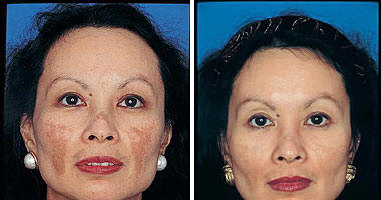 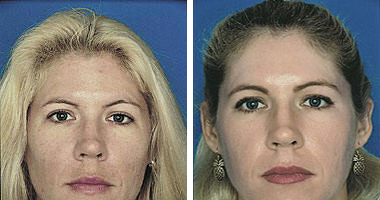 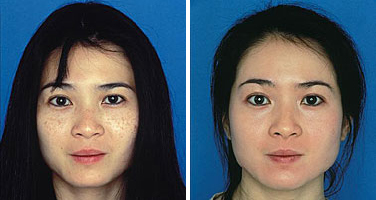 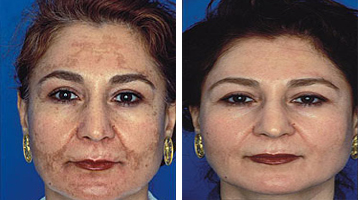 
Some pictures courtesy of Obagi NuDerm For more information on Obagi NuDerm, visit their web site at www.obagi.com