59 year old male before, 3 days after and 4 weeks after injury of hid right forehead. Patient went to the emergency room with flap avulsion and lacerations, and was sutured and stapled in the emergency room by ER physician. He then saw Dr Speron in clinic and started the Scar Support Treatment. Patient was offered laser treatment, but refused at this time. Patient is very happy with the progress and scarring even though at his 1st visit, he was quite upset and anxious.

32 year old before, 6 weeks after and 3 months after excision of old scar tissue. Note how much more narrow the scar is just by simply cutting it out and re-closing it

32 year old before and 3 months after excision of old scar tissue. Note how the scar falls into the nasolabial folds (smile lines). This will be much more natural when she smiles and as she gets older. 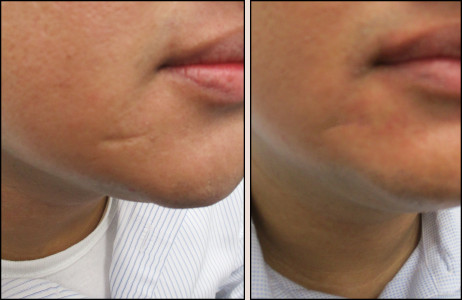 24-year-old Hispanic male before and 6 months after scar revision of a wide depressed lateral chin scar that bothered him. Usually inside PDS stitches are used to hold together the incision at multiple layers. The sutures absorb over 4 months to try to keep the scars as skinny as possible. Notice also that the scar is much shorter in length because short scar techniques are used to close it in on itself. This results in puckering initially but this settled pretty quickly, even in young skin.

54 year old before and 6 months after scar revision of an unattractive scar on his lateral upper lip/nasolabial folds area. He was unhappy and missing a natural hair pattern even though he had hair plugs and hair restoration surgery elsewhere to try to improve it. He was still unhappy with the scar width, the redness and the irregular hair pattern. He underwent a 15 minute scar revision in the office under local anesthesia and is very happy with the results. After surgery, he only used the natural Scar Support Treatment for 3 months.

37 year-old female who had liposuction elsewhere of multiple body areas. Patient is showing 3 days after surgery when she was concerned about her incisions and came to see Dr. Speron for a consultation. After using the natural Scar Support Treatment for only 5 days, you can see the improvement of her incision healing.

48 year old female before and after 5 laser photofacial chronic acne scar removal sessions. This laser treatment is best at treating the redness which is active inflammation. Patient really did not have active acne at this time. You'll notice that the permanent white scars were not improved. You can do some wrinkle reduction laser treatments under these old white scars to build a little more collagen but once the scars are white, mature and flat, skin care products and laser treatments do not do much to them. She is a candidate for surgical scar revision and excision of these old white scars if she wants to make them skinnier but she did not wish to have surgery.

81 year old before and 6 months after scar revision of an slightly wide, hyperpigmented right lateral forehead scar. This bothered him. He underwent a 8 minute scar revision in the office under local anesthesia and is very happy with the results. After surgery, he used the natural Scar Support Treatment starting two weeks after surgery and for only 3 months. He did not have any laser treatments.

What do our patients say?

"My scar looks so much nicer."

"It's amazing what scars can look like if closed by the right surgeon!"

"Your patients should wake up and realize what you can do for them!"