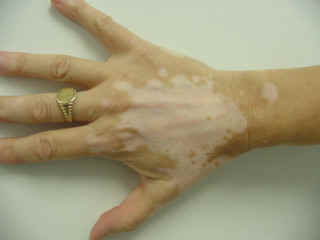 Vitiligo is a common skin disorder in which white spots appear on the skin usually occurring on both sides of the body in the same location. The disease has been around for thousands of years. Vitiligo occurs in 1-2% of the population. It affects both sexes, all races and all ages. 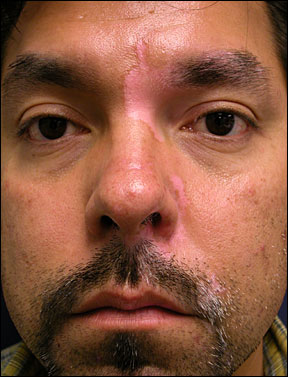 Vitiligo is a skin disease that causes permanent white spots or patches on the skin. Vitiligo is fairly common affecting 1 out of every 100 people. Vitiligo can be found in all parts of the world. It affects all ethnic groups, but is far more disabling in those who have dark skin. This skin disease affects males and females equally. The usual age of onset is between 10 and 30 years old, but the condition can start at any age.

Vitiligo is an autoimmune disease. The human body is made of tiny building blocks called cells. One group of cells are called immune cells. These are the cells that normally fight off infection and germs. Another type of cell is the melanocyte. These are the cells that produce pigment molecules which give the skin its color. Vitiligo occurs when the immune cells start attacking and killing the melanocytes. As the melanocytes die, the skin turns white because it no longer has melanocytes making pigment or color. No one knows why the immune cells attack and kill the melanocytes in patients with vitiligo. In rare instances, vitiligo may affect eye, hair, and gum color. Although the exact cause is unknown, vitiligo is sometimes set off by severe stress. Vitiligo has been associated with certain diseases such as hypothyroidism, diabetes mellitus, Addison's disease, pernicious anemia, alopecia areata, and halo nevi. It has also been noted that vitiligo has a tendency to run in families.

When a person first develops vitiligo, the disease usually starts as flat white spots on the hands or around the eyes. The white spots usually do not itch or hurt. These white spots or patches are commonly circular and occur in the same areas on both sides of the body, thus producing a mirror-image effect. The spots are more common over bony areas. Most people experience a slow progression of the disease with more and larger white patches, while in others, the patches disappear by themselves. There are two main types of vitiligo: the generalized form and the segmental form. In generalized vitiligo, the patchy white areas are often symmetrical, flat, have definite borders, and may affect or spread to any part of the body. In segmental vitiligo, the white patches usually stay on one side of the body, and they do not spread after the first six months or so. In some people the white patches spread over the entire body. This can make an African-American look like a Northern European-American.

Vitiligo is very difficult to treat. Treatment often depends on the severity of the condition and the patient's feelings of disfigurement. Cover-up cosmetics work well for some people. Other more sophisticated forms of treatment include gradually developing color back in these patchy areas (repigmentation) by PUVA ultraviolet light treatments or by surgically transplanting melanocytes into the white areas. These treatments are most successful in patients with vitiligo over less than 50% of their body surface area. With PUVA therapy, the patient takes a pill (psoralen) one hour prior to coming to the doctor's office. The patient then stands in a box and the skin is exposed to ultraviolet type A light. This must be done two to four times per week for fifteen to thirty minutes each treatment. Patients with vitiligo usually require 100-300 treatments over a year or more. There is a 50-70% success rate with this treatment. The newest treatment for vitiligo involves transplanting melanocytes from areas of normal skin color into the areas without skin color. This treatment is still experimental and is only done at university medical centers. Although there is very little that can be done to prevent the loss of skin color, patients with vitiligo should use sunscreen of SPF 15 or higher on the white patchy areas to prevent sunburn and skin cancer. The melanocytes, which are missing in these white patchy areas, are the skin's natural protection against sun damage. So without these melanocytes, people with vitiligo are prone to sunburn in their white areas.

Some patients, especially those with white patchy areas over more than 50% of the body, may choose to remove the skin color from the normal areas. This is called depigmentation. If a patient chooses to depigment (turn white all over), the doctor will give them a prescription for a cream called monobenzone. The patient applies the cream to the normal skin areas twice a day for two to three months. Depigmentation is permanent and irreversible. When the depigmentation process is completed, the patient's skin is all one uniform color (pale white).

Vitiligo can be a debilitating skin disease, especially in cultures with dark skin. People with dark skin and vitiligo are often ostracized by their community. Recent advances in treatment for this condition should offer these patients new hope.


23 Things To Do While Recovering From Your Surgery